You can also read this post on the EA forum. This post was written by Tessa Alexanian, Megan Crawford, myself, Finan Adamson, Brian Wang, and Cody Wild.

This is a retrospective on Catalyst, a one-day collaborative biosecurity summit that was held in February 2020 in the San Francisco Bay Area, written by the organizers 1 for anyone who might run a similar event in the future.

How did the event go?

We ran Catalyst because we wanted to create a venue for discussing biosecurity in the SF Bay Area. The theme of the summit was that biotechnology is advancing quickly, many different futures seem possible, and that we must thoughtfully collaborate in order to ensure that we get a positive future.

Catalyst was attended by about 100 people representing various levels of engagement with biosecurity (from undergrads to experienced biosecurity professionals) across several different communities (effective altruists, biohackers, academics, industrial biotechnologists, and policymakers), with a slight preference for those coming from the SF Bay Area in order to facilitate continued post-Catalyst momentum. The event was funded by a grant from the Long Term Future Fund.

Outcomes from the day of the summit

We did an immediate post-event survey to gather outcomes from the event. We intended to run an additional six-month follow-up survey, but then 2020 happened.

We don’t feel totally satisfied with the robustness of our outcome data, but also aren’t sure what a solid methodology for assessing event impact would have been. Participants seem to have considered the event a good use of their time; when asked if they would attend a similar event in SF again, 30/35 respondents said “Yes”, and the remainder said “Maybe”. One experienced organizer told us that Net Promoter Score was a standard assessment: our NPS was 742 but to be honest we’re not sure if that’s a good score or not. (Edited to add: according to a comment from Ben West this is quite a good score.)

In both the survey and while talking to participants, we heard that Catalyst exceeded expectations. Many people shared enthusiastic positive feedback with organizers during the reception, and the energy in the room was very high. Participants appreciated how small the summit was, how many cool people were there, the exciting conversations, and the diverse backgrounds of attendees and speakers. Some illustrative quotes:

A few more concrete outcomes, each reported by a different participant:

The main outcome of Catalyst was the day-of experience for the participants. A few secondary outcomes:

We were hoping to have more post-event outcomes, but several difficult-to-anticipate things got in the way of this:

We think a counterfactual version of this event, in which the two things above did not happen, would have had greater impacts beyond the day-of experience of the participants.

Should other people run a similar event?

Basically yes. We think the event provided good value for time and money.

Time: organizing Catalyst was the main side project for several of the volunteer organizers for several months, but it wasn’t a ridiculous amount of work. A rough estimate is that we spent between 350 and 500 hours on the event, split across the 6 organizers. See more details under Organizing Team below.

Money: a much cheaper event could be run either online or with in-kind offers from an academic venue… but we think there’s quite a lot of value in having a nice venue (to put people in a novel, connection-oriented mood) and providing good food and drink (so people stay in the venue and talk with each other). See more details under Budget below.

One reason we might not recommend running a similar event is if your team has only minimal connections in the problem area you’re focused on. We’re not saying you need to be super well connected, but you should hit the threshold of “knows someone who knows someone’s email” for at least some of the speakers you’d want to invite, and having accessible, well-connected advisors is really helpful (see more details under Recruiting Speakers and Getting help and mentorship).

This section is long, and may not be interesting for anyone not trying to organize a similar event! You have been warned. We categorized each section as a success. near miss, or failure.

Our timeline was a near miss. That is, nothing went wrong, but if we hadn’t for external reasons needed to reschedule, the event likely would have gone poorly. Our big mistakes were:

It’s also a near miss (though one entirely beyond our control) that we’d have cancelled Catalyst if it had been scheduled a one week later. As it was, Catalyst happened 4 days before the first reported community spread of COVID-19 in the USA and 22 days before the SF Bay Area went under a shelter-in-place order. It’s a little weird to have hosted an event on biosecurity and pandemic preparedness in late February 2020, haha??

Success in terms of handling available funds, but near miss when it comes to taxes. Organization and a conservative buffer were important to the former. If we could do things again, we’d clarify our tax situation (an individual organizer receiving a multi-thousand dollar grant) earlier on with our funders. Our general budget advice:

Our original budget was put together with advice from our advisors and other event organizers we knew, but it ended up being incorrect in a few ways. 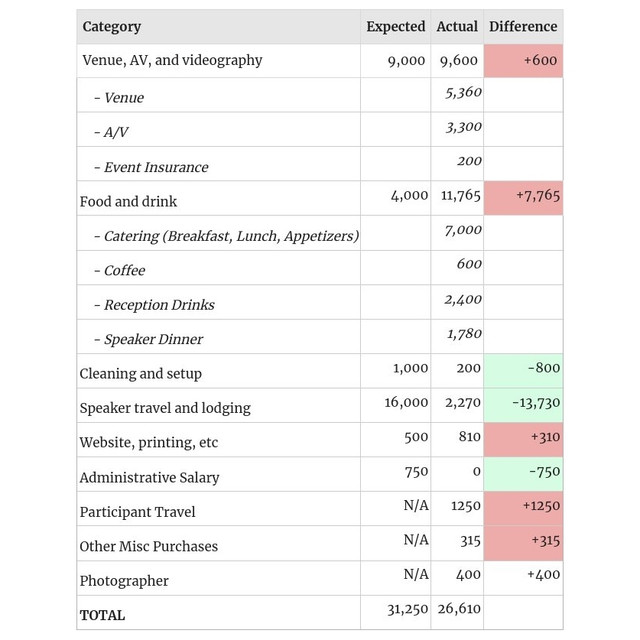 Our program and event structure was a success, especially the conversations between individuals. The event had the following kinds of structured programming:

You can see the complete schedule in this PDF. As the schedule PDF shows, we had a few bookable spaces in the venue, but in practice participants just talked informally with each other. Here is our main programming advice:

Venue, Food and other Logistics

Our conference logistics were a success. We think logistics are really important, since even if a conference goes well intellectually, if it’s chaotic on the day of, or if the food is bad, that can dominate peoples’ experience. We were pleased to have a number of people day-of who came up to the organizers and said they were impressed with how smooth and problem-free the day as a whole was for them.

We think our venue and food were solidly a success, despite a few minor issues. AV was a failure in its outcome, though it’s not necessarily clear what we should have done to prevent that. Onto some more detailed notes:

We’re really happy with the group of people who ended up speaking at Catalyst (success) but we had a near miss with cancellations (almost 20% of our invited speakers had to cancel somewhat last minute). Thankfully, we had a lot of flexibility in both our venue and schedule.

When deciding who to invite, we thought about the balance of perspectives we wanted (e.g. covering industry and academia, ideally local) and specific topics we wanted to cover. Our advisors were extremely helpful at this stage, as they often knew of good speakers who would provide desired perspectives. We also made a long list of relevant organizations (mostly local ones) and looked up people who worked at those organizations to contact.

Some additional advice on recruiting speakers:

Recruiting and Communicating with Participants

Overall, we feel happy with the participants who were present at Catalyst (success) and no one seemed terribly confused by our communications (success?). We sent a lot of emails in the few weeks leading up to the summit, with various actions for participants to take, and that seemed like a good way to build enthusiasm / engagement.

Catalyst was organized by a team of six people (Tessa Alexanian, Cody Wild, Finan Adamson, Jeffrey Ladish, Megan Crawford, and Brian Wang), helped by three advisors (Megan Palmer, Kevin Esvelt, and Jun Axup). We estimate that we spent between 350 and 500 hours organizing the event, split unevenly across the six organizers.5

This team grew around a core set of existing organizers of the East Bay Biosecurity meetup. All organizers on the team had some level of event organization or operations experience, including:

While we don’t have a clear counterfactual, we believe this experience was valuable to the execution of Catalyst, both in the form of practical logistics (e.g. having some notion of how to book a venue) and in terms of judgment and intuitions honed from prior similar situations.

Getting help and mentorship

Our advisors were super important, even though we only had a few meetings with them (maybe 5 hours in total).

We also had a really helpful 30-minute call with a CEA staff member early on about logistics and programming, which covered lots of useful ground (e.g. how to structure emails to speakers to increase the chance they’ll be interested).

We have some additional advice specifically around meeting and information management: